In her new book, Austrian author Anna Kim uses files to talk about the difficulty of adopting a child in the United States in the 1950s. The native South Korean raises topics such as racism and the question of origin and spins threads into the present and the racial ideology of the Nazis.

Green Bay in Wisconsin in 1953. This small town is almost exclusively inhabited by whites, the fading little black community leads a marginal existence, and it will be eleven years before segregation is lifted.

Feed is there for anyone interested in language”, Anna Kim

In this environment, a young woman offers her child for adoption immediately after birth. Suspicion soon arises that the boy’s father is black, but the mother gives only vague information. “She was really playing hide and seek,” Anna Kim says. “Until the end she did not reveal the identity of the father. In my version, of course, it was more extreme, but in real life it was also very secretive. Until her death.”

Kim was given the original case files. She revised this in literary terms, but kept the formal structure of the bureaucratic report. “I used this kind of file because I was so interested in this supposedly objective language,” Kim says. “Especially in our present, where there is this discussion of facts, fiction, and fake news, all of this comes into play.”

Social services are repeatedly offered to Danny’s mother who has been put up for adoption. On the one hand, they want to charge the hospital and accommodation costs for her son from the woman living in the Precaria, on the other hand, they want to clarify the identity of the father, because the mixed-race child at that time had little prospect of a foster family.

Reading these files, Kim was amazed at the value judgments that were made: “For example, ‘The room is messy! “Of course, something like that immediately allows conclusions to be drawn about the character of the person being examined. It amazes me just how subjective one writes in this way.” 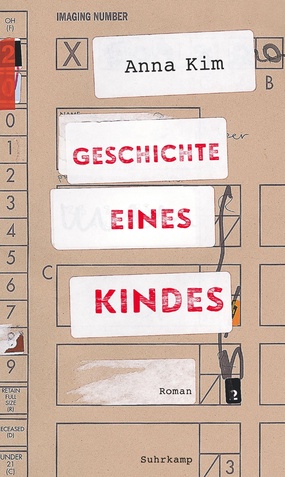 The files are one form of text in Anna Kim’s novel A Child’s Story, and the other is the report of first-person narrator Franziska, who sets out on the path of a social worker who once dealt with the Danny case and encounters Austrian Marilyn Winkler, who studied anthropology in Vienna during the Nazi era . According to Anna Kim, reading textbooks at that time about measuring people was hard work.

“The surprising thing is, I didn’t get the impression that much had changed over time. After all, I grew up with similar descriptions of my appearance and it wasn’t that long ago that he explained to me exactly what his eyes looked like, and of course the word cleft eyes was used.”

Detective in the memory room

In addition to the identity of Danny’s father and the story of the Austrian anthropologist, the first-person narrator, as half-Korean in Austria, also explores the question of what a place makes of a person. Brilliant as Anna Kim who solves the language in her novel. As if Raymond Chandler’s detective Philip Marlowe was searching for indelible spaces of memory rather than chasing down criminals.