A Japanese-language Twitter user commented on an alleged DW video of a Ukrainian refugee who was said to have blackmailed a woman: “It appears to be a DW report.” The video report, published by the Japanese network Twitter, makes serious allegations against the Ukrainian “Petro Savchenko”. The Twitter user who commented on the video continued: “I want to see the original video. Please tell me the link to the original video.” Doubt reverberates between his lines – and rightly so. Since there is no original video, the video of the alleged criminal fugitive is fake. More on that later.

This video is not an isolated case. Since Russia invaded Ukraine on February 24, manipulations, false and fake allegations have been circulating on the Internet on a daily basis. Fake media plays a special role here: videos, photos and screenshots that are said to have come from international broadcasters like CNN, BBC or DW, but are in fact manipulated or even fake. Some of these posts even go viral, reaching hundreds of thousands of people. Objective: To disseminate pro-Russian, anti-Ukrainian, or predominantly anti-Western propaganda and narratives that aim to sow doubt about Western reporting—while at the same time potentially damaging the credibility of the established Western media.

What happened in this case? A Japanese-language Twitter account focusing on the war in Ukraine recently posted a file video split (Archive here), which reports on an alleged refugee from Ukraine.

The refugee’s name is Petro Savchenko and he is said to have blackmailed dozens of German women. He is said to have threatened to publish “pornographic pictures” of them, recorded with a hidden camera, after they met in bars. The video also claims that the police are investigating Savchenko, who is now facing a prison sentence.

The video, which has only been viewed a thousand times, looks like an original DW video at first glance. In fact, minimal deviations can be observed only upon careful analysis: the font used does not correspond one hundred percent to the DW font, which is easy to recognize, for example, with the letter X. In addition, periods are set at the end of the sentence that do not occur In DW videos. You should also be suspicious: the name “Petro Savchenko” does not give any corresponding results when searching in search engines. No media reported the alleged multiple blackmail incident, neither in German nor in English or Ukrainian, which is unrealistic in such a case. In addition, the video does not provide any information about where and when the crimes occurred.

Further search leads to more discrepancies: a reverse search for the image of the alleged perpetrator leads to a profile on the Russian website TopDB.ru, which, according to available data, is said to belong to Pavel Poperechnyy. He belongs to Sevastopol and according to his other social media profiles, he does not live in Germany. All of the allegations in the video are unfounded and perhaps not unreasonably vague – a technique used in previous fake news stories to make history checking more difficult.

An alleged BBC video has reached far more than the fake DW video: After the Russian missile attack on the Kramatorsk train station, which killed many people, a video posted several times was circulated and viewed by a total of Half a million times. Shared in several pro-Russian files, it shows the bodies in Kramatorsk and a missile that landed nearby. The text claims that the missile came from the Ukrainian forces and was fired at their own people.

BBC is different Immediately he described the video as “phantom”. BBC producer Joe Inwood, who covered the BBC’s missile attack, confirmed: The report is not real, but it bears the BBC trademark, which raises fears that more fakes may follow. On the Ukrainian Twitter channel, which described the photo as “fake”, it is video notarized (Archive here).

The clip, which seemed original at first glance, went viral: BR fact-checkers found posts in German, English, Italian, Spanish, Catalan, Hindi and French in the first few hours alone. So cyber warfare expert Sandro Jaiken spoke to BR about a “coordinated but urgent operation” of disinformation. Roman Osadchuk, a digital forensic scientist and open source expert at the Atlantic Council Research Center, was more specific in an interview with DW: “In the case of Kramatorsk, it wasn’t just a fake video, it was just a small part of the whole campaign. Human wanted to convince people that The Ukrainians are bombing their own people, and it’s ridiculous.” The video was accompanied by several posts on the Telegram messenger service and on other platforms.

Fake tweets on CNN cause confusion

When tweets from the world’s most popular news channel, CNN, are shared, this indicates a high degree of credibility. But even here, not everything that looks like it is real at first glance: Several fake tweets or even fake CNN accounts have circulated since the start of the Ukraine war, forcing CNN to deny them. For example, when the so-called CNN Twitter channel “CNNUKR” reported the first death of an American in the Ukraine war – it was a fake story, as our fact-checking report showed. It was similar to a fake tweet about an alleged bombing of a hotel in Ukraine. 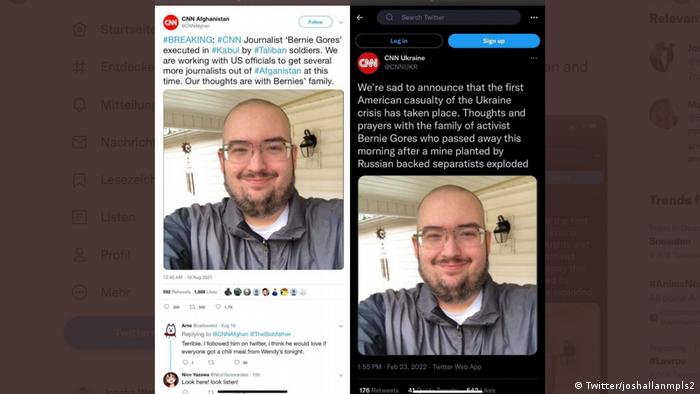 CNN’s fake tweets showed a death, which was not the case in both cases

Presumably, screenshots from CNN’s live broadcast are spreading false information. This post indicated that CNN mistakenly sold images of the 2015 explosion as current. This representation is also wrong, as an AFP study proves.

There is no BBC nuclear attack

This kind of fake news in the best sense of the word is nothing new. In the past few years, there has always been false news attributed to well-known media outlets. A particularly tragic case: In a video, a moderator at a BBC News-like studio reported a military incident between Russia and NATO and the explosion of a nuclear bomb in Brussels. The broadcaster clarified that the video is purely fictional and not from the BBC – yet it is still being shared, as reported by Reuters.

Who is behind these misleading media attacks?

The actual authors of fake videos, photos or tweets are not always immediately visible. However, experts see evidence that the paths lead to Russia. Josephine Lucito, a professor in the School of Journalism and Media at the University of Texas at Austin, sees the professional structures behind fake production. Much of the pro-Russian disinformation can be attributed to the Internet Research Agency (IRA), a Russian trowel manufacturer that has been active since 2012. The IRA became known for its attempt to influence the US presidential election campaign in 2016. Since 2014, numerous publications have also been published. of false reports attributed to the Irish Republican Army about Ukraine.

“The long-term goal of this misinformation coming out of Russia is to sow distrust in the media system,” Loquito said. In doing so, the credibility of the media is also deliberately exploited for its own purposes. This is a relatively new phenomenon of disinformation, where allegedly legitimate news is spread under false flags.

“It is often state or state-related actors that are behind this sophisticated production of disinformation,” confirms Ingo Mannteufel, DW’s Head of Cyber ​​Security. In the specific case relating to DW, the authors of the fake video attempted to use DW’s design to “create disinformation and sway opinion in the Japanese Twitter space in line with Kremlin propaganda”. This form of misinformation is called plagiarism, whereby a digital identity is falsified in order to gain trust and credibility.

How do video forgers work?

As a rule, fake media are based on an exact copy of the design of the station in question. Digital forensics scientists at the Atlantic Council Research Center came to this conclusion, too. In the case of the fake BBC video, the BBC’s logo, inserts and style were copied and moved to give the appearance of an authentic BBC video, according to researcher Ito Boziashvili. “They copied everything that made up the BBC video and then created fake videos. They took the entire BBC model, including the title.” It is not very difficult to create such a replica, but it requires knowledge of video editing and appropriate software.

It’s hard to gauge the impact of fake news, says Scott Radinitz of the Henry M. Jackson School of International Studies at the University of Washington in Seattle, especially with regard to the war in Ukraine. “Given the fact that most people already have strong opinions about the war in Ukraine, they are more likely to consume news that supports their view and instinctively reject what contradicts it.” Therefore, this “information war” measures are more aimed at those who are receptive to such news. In a way, Radnitz told DW it was an “honour” when news channels like BBC, CNN or DW became the target of attacks, because they are seen as credible and relevant players.