There are always bottlenecks in the blood supply in Germany – for example during the holiday season. How does blood donation work, who can donate and what advantages it has for donors.

A total of 15,000 blood donations are needed every day in Germany – to treat cancer patients, blood transfusions for diseases of the heart, stomach and intestines, complications during childbirth or to treat accident victims. According to the German Red Cross, it was difficult to cover the normal need for blood supplies during the Corona crisis. Blood donation is generally done in the summer. Therefore, on World Blood Donor Day, donations are once again demanded. The most important questions and answers about donating blood.

How willing are Germans to donate blood?

One in five Germans have already donated blood, according to a representative study conducted by digital insurance director Clark in collaboration with YouGov, in which about 1,000 people were interviewed. Among people who have never donated blood, there is a willingness to do so: 25 percent of 18-34-year-olds can imagine donating blood, among people over 55, the desire to donate blood for the first time drops to 14 percent. However, nearly every fifth person in Germany has never donated blood and cannot imagine doing so in the future.

For nearly half of Germans, the most important reason for donating blood is the desire to help the general public. Financial incentives only play a role at 18 percent.

She can hardly walk. But this has nothing to do with her back. but with blood

Is it enough to donate blood?

According to the German Red Cross, only three percent of the population donate blood on a regular basis. In order to ensure an adequate supply of blood preparations in the long term, about six percent will have to donate regularly. Experts are particularly concerned about demographic change. Every year, around 100,000 active blood donors across Germany cut off due to age or disease. On the other hand, the need is increasing among the elderly.

The blood supply runs out regularly especially in the summer, when many people are on vacation. In addition, the Corona pandemic has turned away many potential donors. At the beginning of the Corona crisis, blood donations decreased significantly in some places. But demand has also fallen because clinics have canceled many operations, and the situation has stabilized again in the meantime. But the number of interventions is now increasing, also due to many catch-ups. According to the blood donation service DRK, there are hardly any reserves.

Who can donate blood?

In principle, anyone between the ages of 18 and 68 and weighing 50 kilograms or more can donate blood, according to the Federal Center for Health Education (BZgA). The maximum age for the first donation is 60 years. In principle, the elderly can also be taken into account if their state of health allows this.

How many times can you donate blood?

Who is not allowed to donate blood?

Anyone who has been in contact with someone with Covid-19 can donate blood again just ten days after contact. After a corona infection with a fever, the waiting time after being free of symptoms is 28 days according to the DRK. During pregnancy and after childbirth, women should not donate blood temporarily. The temporary exception also applies after many vaccinations and trips abroad to malaria regions or countries at high risk of hepatitis. It is not possible to donate temporarily after major surgeries or when taking certain medications. Anyone with iron deficiency should not donate blood until iron reserves have been replenished.

Anyone who is unsure if they are a suitable blood donor can get an initial online overview with the DRK Donation Checker. DRK also offers a toll-free hotline for further questions. This can be reached Monday through Friday between 8am and 5pm at 0800/1194911.

More information about donating blood from DRK or BZgA.

After acupuncture treatments, unless it can be shown that they were performed aseptically, as well as piercings and tattoos, you should wait at least four months before the next donation in order to rule out infection with certainty. Waiting periods also apply to people whose sexual behavior may put them at greater risk of transmitting infectious diseases such as hepatitis or HIV.

Are there people who are completely excluded from donating blood?

This applies, for example, to some pre-existing conditions such as insulin-dependent diabetes, hepatitis, or chronic inflammatory diseases.

What can I expect from donating blood?

Anyone who donates blood must first fill out a questionnaire at the blood donation service and undergo a medical consultation with a medical examination. It takes about ten minutes to donate blood. About 500 milliliters of blood are taken. After donating blood, donors must: Rest within the blood donation service for half an hour before returning home. When preparing to donate blood, you should drink plenty of fluids – the DRK recommends drinking two liters of water. Also, do not donate blood on an empty stomach.

What should I consider after donating blood?

It is best to calmly approach the day after donating blood. More physical exertion – such as going to the gym or sauna – should be avoided for a day.

Does donating blood have an advantage for the donor: indoors?

Anyone who donates blood undergoes a small medical examination. Blood pressure and temperature are measured and hemoglobin level determined. If the hemoglobin level is very low, this indicates that the person has too little iron in his blood. After the donation, the blood is checked for infectious diseases such as HIV or syphilis and the blood group is determined. “People who donate blood regularly are less likely to have a heart attack than people who don’t donate blood,” says BZgA. The results of the study indicate that regular blood donation has an effect in lowering blood pressure in people with high blood pressure.

Do you get money to donate blood?

Anyone who donates blood can receive a so-called expense allowance from blood donation services. In addition to money, this can also be a voucher or a small gift. 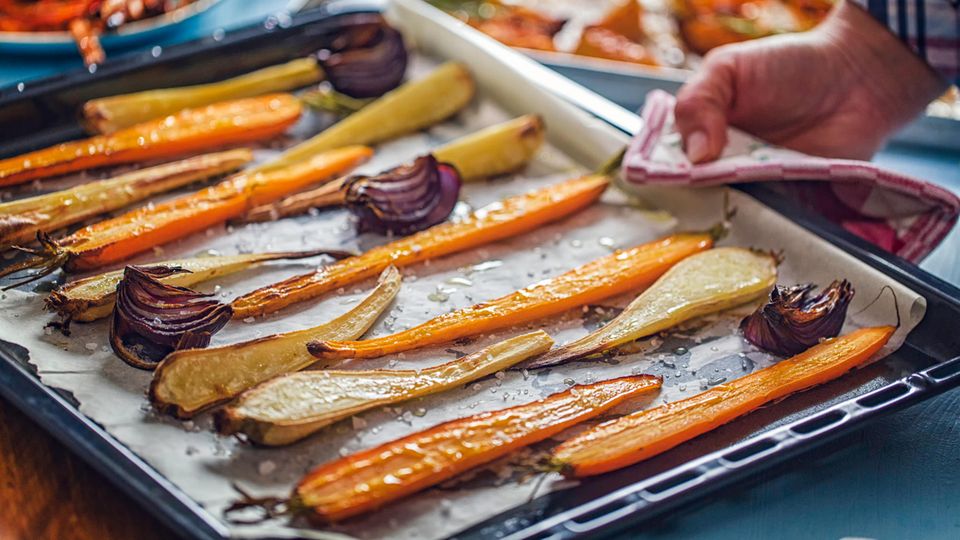 grilled vegetables
Grill the carrots, parsnips, onions, peppers and zucchini on a baking sheet. The roasting process removes moisture from the vegetables and increases flavors, so you need less salt for seasoning afterwards. Enjoy the vegetables on their own afterwards or turn them into hot soups or sauces.
Important: Do not cook vegetables for a long time or over high heat. Gilding rather than combustion is the general rule.

Where can I donate blood near me?