Using the formal model, we create distance or closeness in our communications. In the 16th century, the phrase “Your Highness, are you okay?” Instead of “Your Highness, are you okay?”. The authorities were not dealt with personally. They were not added as we use them today until a century later. This combination is considered a tactful form of discourse, because distance creates literature. You who we know today from our virtual lives in social networks would like to overcome this distance. After all, the Internet knows no hierarchy. Startups also live this culture and shape the world of work accordingly. However, in companies and large corporations, things are more complicated: on the one hand, people have to work together in a networked and agile way, and on the other hand, there are hierarchies and sensitivities that keep people hooked on you. As a result, mixed forms arose in many places. “If so, please send me your answer by Monday,” this is sometimes said in emails. And there are still those who say that gender-equitable language would spell disaster for our communication.

Then there are those companies that enforce a first name culture to create a familiar, familiar feel. Some management likes to be spoken to by employees on first-name terms, executives give their teams the familiar format and job postings are reviewed accordingly. Authenticity is the most important. When companies don’t know who they are and act paradoxically, such initiatives can seem imposed or unnatural. Also, depending on your personality and attitude, you may be more respectful. And also useful, for example when meeting for the first time or in conflict conversations. Even others feel overwhelmed or offended by you. After all, many of us have grown up with the belief that an older person would offer them to you if they so desired. After all, each person should be able to decide for himself how he wants to be treated. So, is the standard “you” salutation appropriate in company? Should Du or Sie be identified or left to develop the company culture?

Many believe that you alone do not create a culture. I say: It’s an important sign. Because the form of the first name across the hierarchical levels indicates: with us, what we have in common is in the foreground. In the group, I’ve experienced that the salutation draws boundaries: we as an oath are you – and the others are you. Dozen as a noble for a professional relationship? You can achieve more in the sense of modern corporate culture if you make “du” the standard. Etiquette and the effect of communication should not depend on the salutation. There is a saying that it is easier to reason someone by using the first form than by using the “official” form. I think anyone insulting another in the course of a business has interaction issues that run deeper than the shape of the title. Modern companies don’t take themselves seriously – and “you” is an important key in a chain of actions that are part of a company’s culture of value and equality.

Eva Stockhead of people and marketing at Comspace, blogger and author.

“You’re in company” can’t be a one-size-fits-all solution. Ultimately, it’s a corporate culture decision, and therefore it’s also an important question about how employees and applicants should view the employer brand. And there is no right or wrong, just an identity-based approach that appeals to people who fit in – or don’t. Because there are employees who feel more comfortable in a more traditional cultural environment because they prefer clear hierarchies. Then there are those who coexist best in a flat hierarchy. In other words, companies filter using first names or first names, which isn’t a bad thing, but it does mean that employers are interesting from the start to those who also fit in with the company’s culture. The recruitment process is not related to anything else.

Sasha Tessina consultant in informing the employer and an expert in communicating with the employer.

at recent days Human Resources Manager His LinkedIn community asked if using first names in the workplace is more zeitgeist or rude. An HRM survey of 1,277 participants shows: The majority use first names at work. This was stated by 66 percent of those surveyed. At least 22 percent said they treat you and you individually. Only one percent uses you strictly as a form of address at work. The remaining eleven percent use the first name on the team, but the executives use the official form. Comments from HR managers and employees provide a look under the surface. How do people feel about you or companies? The content is clear: the first person is an integral part of the world of work. Nobody defends you in the workplace. The majority appreciate first name culture and family bonding. At the same time, the working area is also important for individuals. First name financial contacts – eg at a bank – seem inappropriate. Especially when contacting clients, you can keep an official distance. If Siezen has mastered external communication, it is reasonable to assume that Sie’s greeting also constitutes internal communication. Siezen has been popular for a long time, especially across hierarchies, especially in traditional sectors. This often results in mixed forms – i.e. colleagues use the first name form and the boss uses the first name form. Such a combination between the two of you was not well received by everyone. Matthias Aldorf, expert in human resource governance at E. Breuninger comments, “Once employees have to constantly think about whether they have already spoken in first-name terms or are still talking to them, this complicates collaboration and interaction.” He believes that clear and open communication is the most important thing. The lack of respectful interaction is usually the argument of those who want to hold on to you compulsively. 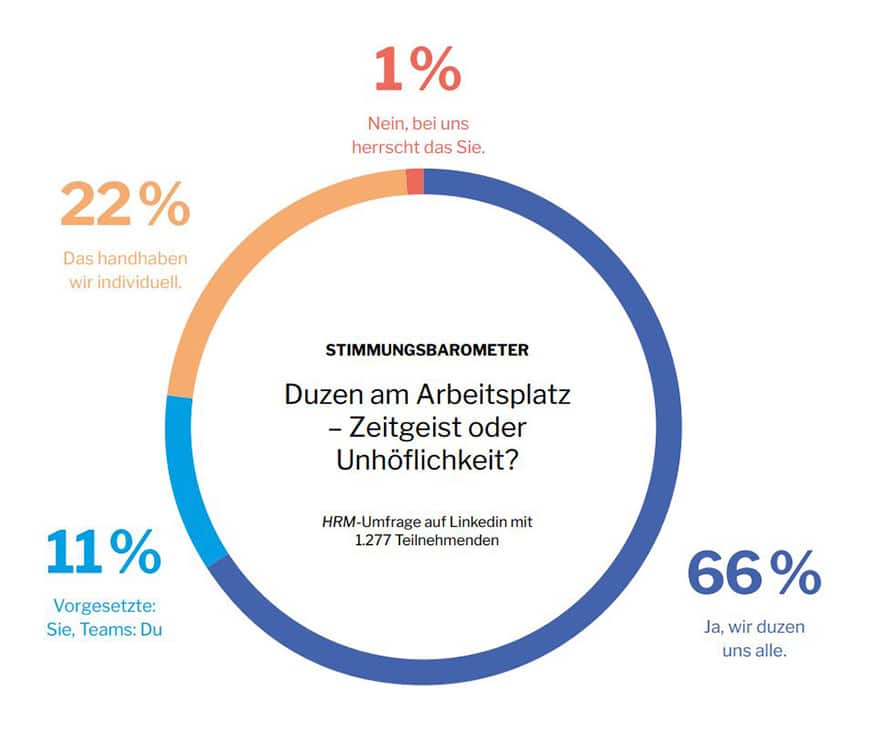 “Respect” is the key word. Siezen guarantees a certain kind of literature, which promises respectful interaction, especially in difficult conversational situations or in conflicts. But strictly speaking, all this can also work for you. “With limitations, it doesn’t help in conflict situations and doesn’t make it more professional,” says Katharina Oberrecht, a senior partner at Ratepay, describing her view as a manager and ex-employee. It’s been working in your culture for years, but it used to work in your culture too and has mixed forms. Always based on attitude and discretion, which is crucial to cooperation. She writes, “I will never want to work in your culture again because, to me, it’s a man-made streak that I don’t need or appreciate.” However, she understands that many attach importance to being treated like you. It’s good to have both.

So there is agreement on one thing: to represent and encourage Duen, but in the end leave it to everyone how they want to be treated. And first name culture can’t be implemented overnight anyway. “First and last names are like all cultural changes in companies: they take time and should ideally grow from within and not be imposed,” wrote Colette Ruckert Henin, Member of the Board of Human Resources and Legal and Business Director at EnBW Energy Baden. – Württemberg. In the meantime, this can lead to mixed forms and inconsistent forms of communication – especially in companies where traditional and agile structures exist. The discourse about it is already part of the change itself and therefore is of great value.

This article first appeared in the print edition of Risk. You can order the brochure here.

Subscribe to the HR press review, HR landscape or HR management job market and be the first to find out all about the latest HR topics and the HR job market.