In the second qualifying session for the 24 Hours race, BMW stayed ahead. The M4 GT3’s best times were kept from midday. Mercedes also stayed in third place and Audi was waiting. Manthey Porsche was moved to the end of the first set due to a double yellow card infraction.

After the first exchange of blows in the middle of the day, there was no change in the top three in the evening, and the BMW M4 GT3 Raw (#98) held the pole position 8:14.771 and did not improve. However, BMW was on a short ride with Sheldon van der Linde half an hour before the end of qualifying. The South African did not damage the car.

Teammate Whitman was satisfied: “It’s going well and the car is good. I hope it continues like this. We have to finish the top four in Q1 tomorrow so we can get a place at the top of Q2. That’s our right focus. Right now.” The fast team still has to qualify for the first playoffs.

BMW retained the top two positions after the second qualifying round for the 24 Hours of Nürburgring.

The Walkenhorst-BMW (#101) started on Yokohama tires and driven by Krognes/Müller/Soucek/Trogen didn’t set a faster lap time than it did in first qualifying. Also in third place was the same car with starting number 12 until noon.

Unlike the BMW in front of it, Bilstein-Mercedes managed to improve its time again and came within a second and a half of the lead with a time of 8:16.167, but that didn’t change the situation. Bilstein’s driver Rafael Marcello said none of the drivers went over the limit. The main thing was to set the headlights correctly so that you were well prepared for the evening. 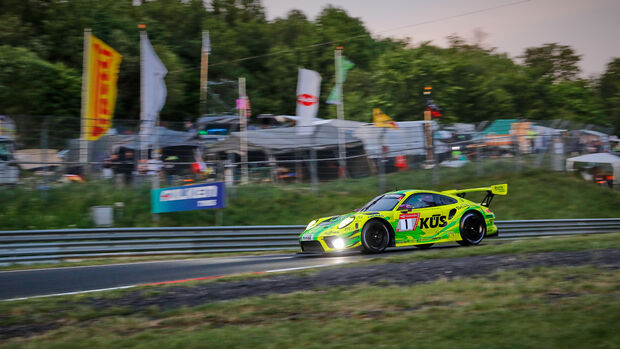 Only then did the best Porsche cars rank themselves. However, the title holders are not from Manthey, but from Dinamic Motorsport (#28 / Engelhart / Cairoli / Ledogar / Preining). Italian Matteo Cairoli passed Nordschleife in a 911 GT3R on Pirelli tyres, with a time of 8:18.145. Manthey-Porsche has landed the heavily defended champion behind. Christensen/Esther/Makovitzky/Fanthur’s starting number 1 was 18th in the rankings, but the race must start from the end of the first set due to a foul when he waved the double yellow flag. This is a huge setback for the top Porsche.

Accidents and Punishment for Falken-Porsche

There was some ignition in the early stages of qualifying. Once out of the pit lane, Huber-Porsche (#70) hit the back of a KTM X-Bow (#116). Moments later, a Hyundai Elantra TCR #830 flew through NGK chicane with Manuel Lauc at the wheel. In doing so, Hyundai destroyed its front axle and caused a longer yellow phase at the point.

Shortly thereafter, Patrick Billett showed no patience and crashed his Falken Porsche into the back of a KCMG Porsche while attempting a double overtake. In the process, the French damaged the front of the number 44—part of which was separated from the 911 shortly thereafter. The hosts then penalized Falken-Porsche for crossing under the yellow flag and imposed a five-place penalty.

Vincent Kolb (#5) in the Audi hit the guardrail in the first 20 minutes as he tried to pass the Cayman GT4. Near the end of qualifying, Scherer-Audi pulled himself back into the pit at a slow pace. The team suspected that the wheel bearing had been damaged.