As soon as you enter Friedrichgasse No. 34, you will feel as if you have just fallen through a rabbit hole in the Willy Wonka Chocolate Factory. Huge weaving flowers bloom meters from the ground, snails compete in races, a tongue several meters long brings out the red carpet for visitors and there is also a cow. However, this does not produce whipped cream, as in the film adapted from Roald Dahl’s classic children’s book, but rather is intended to show where the milk comes from and how the cows are milked. One of them would have already seen what is in this title: Of course, this description could only be about that Frida and Fred Children’s Museum in Graz Act. Only recently did the gates open again for normal operation two years after the outbreak of Corona. Behind these, kids and parents can expect two new, lovable and detailed designs New exhibits: “Does it taste good?” and “everything grows”. We took a closer look at both. Our Critical Testers: Simon and Leah.

What do the numbers on eggs in the supermarket say? How do chickens live? Leah and Simon know it now

They are practically professionals when it comes to children’s museums. They have already visited a fair or other fair in the past. “But we haven’t been there for a really long time,” Simon and Leah said to Abi George, who is also accompanying us. Well – wave the base of the fence he understands. But now we are here and you can play, try and experiment at scale.

As soon as we crossed the door, Simon and Leah stormed into the toilet. You can see that they know each other. Just take off your shoes and jacket and you’re ready to go. The first thing to do is go upstairs “everything grows”powered by sun gate. Simon and Leah are rushing forward – we adults are following. Once you step up to the gallery, it becomes clear: Anyone who thinks of a typical museum with nice exhibits and “please don’t touch” signs is wrong. Not only is touching the exhibits allowed here, it is expressly encouraged!

There is no one stop where Lea and Simon can’t actively try something. Grass seeds are waiting to be sown, cakes with berries can be baked in a wig in the form of leaves, the headphones tell you what really happens during the composting process, and, and, and … the shy leaf is blooming Play and experience truly. At nine years old, Simon is more important at first (the exhibition is for children aged three to seven) – but is a good friend of his little sister. He obviously had a lot of fun with the climbing frame with huge sunflower seeds. 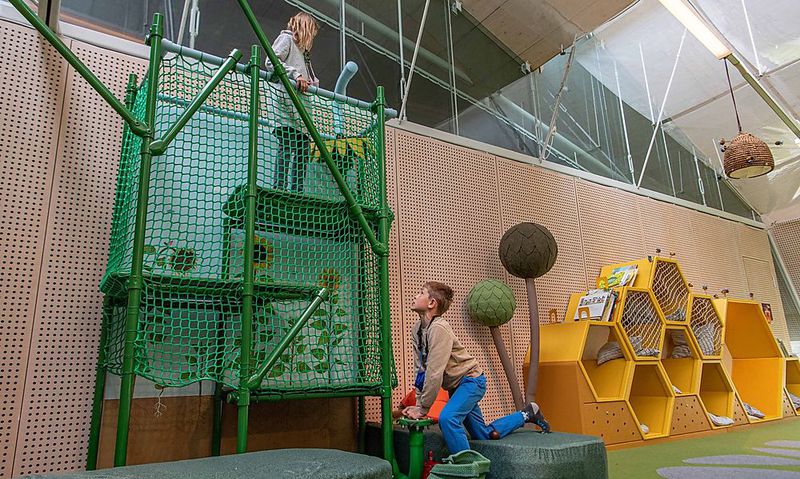 The sunflower seeds come out through the tube system

The basement is colorful and imaginative too. The show is waiting for Simon and Leah there “Do you like it?” For children from the age of eight, it’s made possible thanks to The Klaus Chera Foundation. Right at the entrance, a friendly lady from FRida & freD is waiting for an experiment: two liquids of different intensities are poured into a glass. Then the pea enters – Simon and Leah can see how the pea falls through the less dense liquid much faster than the second, higher density liquid. Then we move on to braiding Striezel, popping popcorn, folding napkins, and turning pancakes. This is where Simon is a pro: he skillfully throws pancakes into the air in the pan and catches them on the fly. “My mom could do it better,” he says. “It manages up to two revolutions.” Last but not least, there is Snackin which to explore the taste buds: a piece of bread, an apple, a chocolate, as well as mealworms. 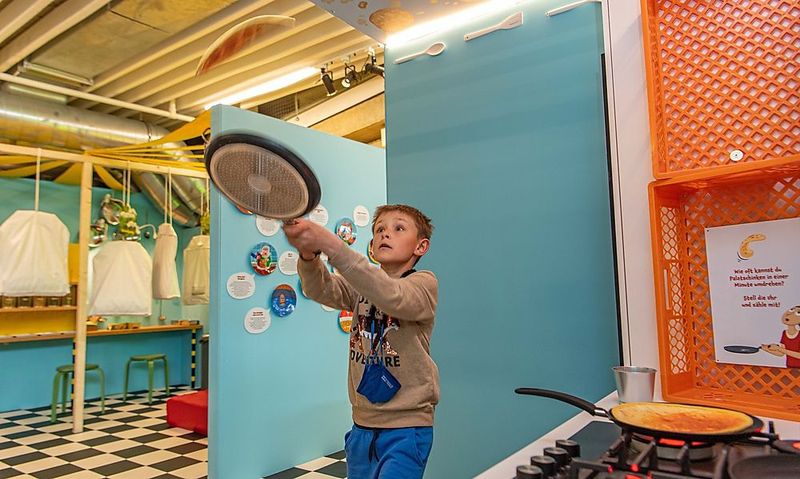 How do they both like it? “Very good. The experiments were exciting and the stations were really fun,” Simon says excitedly. He liked the worms more. “It tastes nutty—really good!” Leah also had a lot of fun today: “I thought Striezeln braiding was cool,” she reveals. In In fact, the two were so excited that they wanted to take another tour of both shows. Just once isn’t enough!